“The Breakout Box XL gives users a weatherproof mixer and “front-end” to the PowerChiton outdoor amplifier system.
The audio system, designed by JL with help from the Custom Audio & Lighting team and Technomad, was designed to operate as a free-standing audio system for single acoustic musical acts, singer/acoustic guitarists, or similar duos, or to tie-in to a larger installed audio system. This public space also hosts storytelling presentations,  kids shows (animals, clowns,etc.) and wedding ceremonies and receptions.” 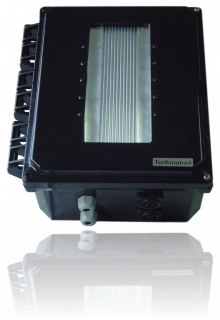 “The system can be used as an ‘overflow’ space  for GCT and the Arts Center Gallery space.  Each of those spaces is linked from their respective audio mixers to the PowerChiton outdoor amplifier and Breakout Box XL via wireless transmitters and receivers, in order to prevent anticipated buzzes/hums/ground loops.  This way the program material occurring in either indoor space can be “piped” into the Technomad-powered outdoor overflow space, with a simple turn of a knob. Both interior spaces are wired very simply, so nothing has to be done inside, to transmit outside.”

“With Technomad’s easy-to-use integrated mixer operation by multiple operators is smooth. The larger new Breakout Box XL  allows for in-box storage of Handheld wireless mic., a pouch with bodypack and lav/lapel mic., and spare batteries, as well as iPod cables with adaptors. I tethered the iPod interface cables and adaptors to the inside of Breakout Boxes with trick line, in order to prevent accidental misplacement. I also siliconed in a foam-core barrier/lip to prevent microphone rolling out, etc.  The Breakout Box XL is just the right size for  accessory/microphone storage and easy use by multiple operators.”

END_OF_DOCUMENT_TOKEN_TO_BE_REPLACED

The PA system features 16 Technomad weatherproof loudspeakers over a four-block area for outdoor public address and entertainment. The loudspeakers are otherwise being used this summer to simulcast programming from a local radio station, and will remain in place for future downtown events.

END_OF_DOCUMENT_TOKEN_TO_BE_REPLACED

This article initially appeared on the Lighting & Sound International website.

With one indoor and three outdoor competition rings, four warm-up rings, a boarding stable and several commons areas, the specialised, international-level equestrian sports facility continues to expand its zoned audio system with Technomad at the core. The privately-owned, 42-acre facility recently added multiple Technomad Vernal and Vienna loudspeakers in the VIP seating and other outdoor areas including a beer garden, picnic area and several lengthy walkways; and converted its zoned audio distribution system to an all-digital infrastructure.

Announcers can target specific announcements or background music to each loudspeaker zone, sub-groups or every loudspeaker in the facility. Digital audio is transmitted wirelessly to each zone where local mixers and amplifiers directly drive the loudspeakers.

“Most horse competition facilities use traditional metal horns, which are adequate for voice but a terrible choice for music, and top-quality music is absolutely critical for our musical freestyle events,” said Rattner. “The initial tests with Technomad were very reassuring and we were blown away by how well they covered and how crisp and clear they sounded over very large open areas. I didn’t have any expectations about service life, but ten years on everybody still raves about the sound – including the professional announcers, who rarely use systems of this quality. The outdoor Technomads are in the elements 365 days a year and are hit with blistering heat in the summer, year-round rain and occasional snow and sleet in the winter.”