BOSTON, April 29, 2008 – Technomad Associates, LLC today announced that San Mateo Community College District in California has standardized on Technomad weatherproof loudspeakers on its three Bay Area campuses. Skyline College in San Bruno; Canada College in Redwood City; and the College of San Mateo are home to multiple indoor and outdoor venues now using Technomad Vienna 16 and Noho C loudspeakers for live sports and event coverage, with additional venues to follow as the district moves closer to completing a multi-year, multi-venue upgrade project that covers everything from field surfaces to bleachers to PA systems. 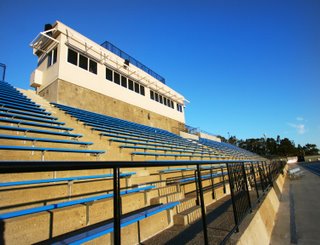 This is an ongoing project with one facility upgrade after another, and we have found the Technomad loudspeakers to be highly versatile with excellent audio quality both indoors and outdoors, said Jim Petromilli, Director of Instructional Technology at the San Mateo Community College District. Outdoors, the weatherproof design is ideal for our three campuses, all of which have very distinct microclimates that can include high heat, heavy rains, and rust from bay moisture. We have also found that the Technomad Vienna loudspeakers perform exceptionally well in our gymnasium at Skyline College for basketball, graduations and other events, and we are planning a similar installation in a second gymnasium.

Lloyd F. McKinney Associates of Hayward, California, procured the loudspeakers from Technomad for all venues, citing the weatherproof design as ideal to handle the different weather elements of the three campuses. The company also led the systems integration project for the gymnasium at Skyline College, home of the Skyline College Trojans, due to the height and complexity of the loudspeaker installations and system wiring. Twelve Technomad Vienna 16 loudspeakers were mounted onto concrete beams or steel structures in the gymnasium, with quad amps to drive selected speaker banks depending on the event. Each side of the gym features five Vienna 16 loudspeakers, with every other one facing the opposite direction to maximize coverage. The final two Vienna 16 loudspeakers were installed on a steel structure above the main basketball hoop, aiming down toward the center of the auditorium.

According to Rick McKinney, Vice President of Lloyd F. McKinney Associates, Petromilli and his team requested an indoor demo after experiencing the high audio quality of the initial outdoor Technomad installation at Bulldog Stadium, adding that the wide horizontal coverage pattern of the Viennas and Nohos allows the colleges to cover wide bleacher areas without hot spots.

Indoor reverb is always challenging in a gymnasium since you’re dealing with hardwood floors, concrete in bleachers and other acoustical challenges, said McKinney. The Vienna 16 loudspeakers provide plenty of power and voice intelligibility for Skyline College events, with a smooth and even audio dispersion throughout the bleachers. In fact, the two Viennas above the main basketball hoop cover the entire gym quite well on their own, but the additional speaker banks give Skyline College plenty of flexibility to orient the sound system to meet different requirements depending on the event.

According to Petromilli, the Skyline College gymnasium is the crown jewel of the district-wide sports facilities upgrade a complete remodel of an existing facility that adds a video projection system and free Wi-Fi in addition to the new floors, bleachers, and PA system.

The Technomads replaced a poor audio system that produced a massive echo, he said. It was difficult to hear in certain areas and we received many complaints. The Technomads bring a huge improvement in voice intelligibility, and the audio quality has improved our attendance in a very competitive market. The PA system has become part of the events at Skyline College, with music and additional entertainment for attendees to create an enjoyable experience.

“We opted for multiple loudspeakers that produce high quality audio at a lower level so we could achieve even distribution through the crowd,” said Petromilli. “This is also very important during track events; with so many events on the field, the participants can clearly hear their events being called. This includes the separate area where shot-put, javelin, and other events are held. And during football season, music is a more integral part of the experience, especially during warm-ups. The Technomads provide a pleasant musical output in addition to clear voice reproduction. We literally have people from visiting teams all over southern California knocking on our press box door complimenting us on our sound system, music, and overall presentation.”