BOSTON, March 1, 2011 – The chimes that ring out every 15 minutes across the campus of Penn State Schuylkill in east-central Pennsylvania create a 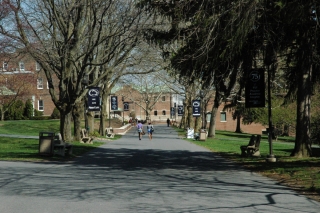 soothing environment for the staff and 1,000-plus-strong student body.  The Technomad Schedulon playback and recording system is responsible for this atmosphere, acting as an audio master control unit for the university’s public address system.
[Show as slideshow]

The Schedulon playback and recording system gives PA system operators the freedom to schedule automatic playback of audio files while maintaining a high level of manual control.  According to Vince Mitchell, IT Support Specialist at Penn State Schuylkill, the unit’s networking capabilities and automatic playback of user-defined schedules were a perfect fit for the university’s needs, while the inclusion of manual playback options added a unique touch.

“The Schedulon allows me to build schedules and upload audio files from my desk using its self-generated web page,” said Mitchell. “The all-in-one design stood out from other systems that required multiple pieces of equipment, keeping our costs down and minimizing rack space.  The system reliably plays out the schedules, and the front-panel knob simplifies manual operation.”

The Schedulon triggers the campus-wide chimes four times an hour from 8am-to-10pm daily, with alternative schedules built-in for special events.  The unit’s password-protected web page allows Mitchell to configure the unit from anywhere without special software to edit schedules and upload new audio files from any standard web browser.

Mitchell has also uploaded emergency notifications for manual playback.  The Schedulon can serve as a digital message repeater in these situations, playing back an emergency message many times in succession to ensure everyone on campus hears the notification.

“We had a scare on campus a few years ago that required a lockdown, so the campus business office required an audio playback system that could double as an emergency management system,” said Mitchell.  “The main purpose of the system, as requested by our chancellor, is to establish a peaceful environment around campus.  The chimes are very soothing and they also serve as time reminders for professors and students.”

The Schedulon is installed in a central rack room, feeding a digital processing system that distributes the audio to the public address system.  Based on Technomad’s military technology for reliable operation, the system has gone offline only once due to a campus power glitch.  After powering up, the Schedulon picked up exactly where it left off in the daily schedule — proof of its reliable backup features for both general and mission-critical operations.